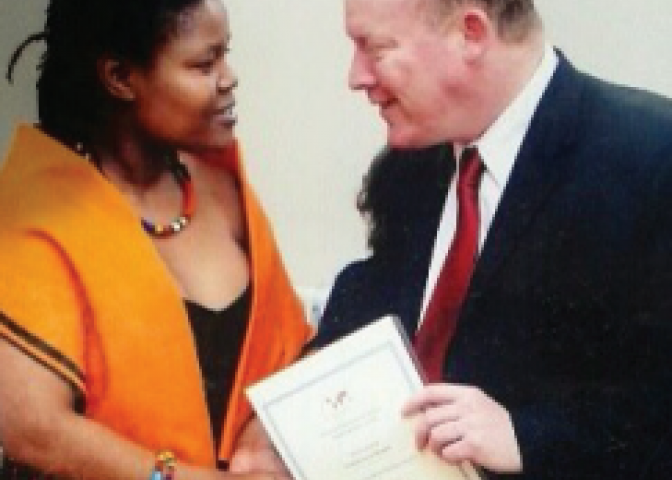 It has been 12 years since Sibongile completed her studies under the Irish Aid Fellowship Programme and, to this day, she still regularly recalls the wonderful experience she had in Ireland. Born and raised in a small rural community in the Southern African province of kwaZulu Natal, Sibongile did not really see herself diverging away from her community’s traditional path for women of marriage and raising a family. That was until she discovered the Women’s Leadership and Training Programme (WLTP), an initiative dedicated to inspiring women and young girls to help them realise their potential, and to challenge gender stereotypes.

After initially attending WLTP workshops and joining a number of women’s activist groups, Sibongile would later go on to work at the WLTP and achieve a Diploma in Development Studies through a programme called Training for Transformation (TFT). “At Training for Transformation I studied my diploma with development workers from all over the world. TFT had a partnership with the Kimmage Development Studies Centre, and this is how the opportunity to study a BA in Development Studies came about,” explains Sibongile. However, living in a community where women were not always treated as equals meant that Sibongile would face adversity in her bid to take up her fellowship award. Fueled by the desire to be a leader within her community, and the determination to further her own knowledge of development, Sibongle applied to the Fellowship Training Programme and was accepted to study on the BA in Development Studies at the Kimmage Development Studies Centre (KDSC). The prospect of studying in Ireland would not only be a dream come true for Sibongile, but also for her grandmother, as she explains: “My grandmother was a key role player in my education. Although she didn’t finish school, she saw the importance of education and always encouraged us.”

Arriving to Ireland in August 2006, Sibongle describes her experience: “Life in Ireland was generally very good. I enjoyed the safe streets; travelling at night without have to fear people. I enjoyed the pubs, even though I don’t take alcohol. I enjoyed visiting with friends to places like Limerick, Belfast and Galway.” However, aside from having to deal with the cold Irish weather, being from a rural community meant that Sibongle sometimes found it challenging interacting with strangers who were not always the most welcoming to her friendly demeanour. “It was sometimes not easy to get into a bus and find silence. One gets in and greets people, but it took me a long time to understand that coming from a rural area is not like being in an area full of people from different cultures.” At KDSC, Sibongle studied diverse topics from gender development to financial management, and enhanced her knowledge of global development issues relating to Africa and the rest of the world. She met wonderful and interesting people in her class and amongst the academic staff, holding particularly fond memories of her tutor, Paddy Reilly. Sibongle feels that she still has a special connection with Ireland: “Every time something comes up about Ireland, my face lights and shines and my heart melts. I know something is special there for me because I have been to a number of places now, but my heart still remembers Ireland in a special way.”

Before departing South Africa to take up her fellowship award, Sibongle had worked as project coordinator at the WLTP. Following completion of her course, she returned home to take up the then recently vacated position of director in the same organisation, while also spending some time working on an intergovernmental project between Lesotho and South Africa as a community development specialist. If it were not for the Fellowship Training Programme, Sibongle believes that neither of these opportunities would have presented themselves to her. Since assuming the role of director, Sibongle has applied the knowledge gained from her Development Studies course to improve WLTP’s programmes and to build capacity in the organisation. Sibongle’s deeper understanding of gender issues helped her to develop a campaign strategy against female abductions in the province of kwaZulu Natal, a custom commonly practised amongst the men of the region, particularly in the cases of proposed marriages. WLTP consulted community groups to try to educate and change perceptions around this tradition which has been so damaging to both women and girls.

Sibongle is currently doing an MA in Maynooth by distance learning, and hopes that she may continue to serve as an example for the women of her community, and that they may be encouraged to invest in their own education. At a national level, Sibongle hopes that South Africa can move towards being a more fair society, with equal opportunities for both boys and girls, men and women.

Sibongile was interviewed in July 2018.