Dr. Kabir is now working in University College Cork (UCC) in the School of Public Health. Dr. Kabir first came to Ireland in 1999 as an awardee from India to study on the MSc in Community Health in Trinity College Dublin (TCD). 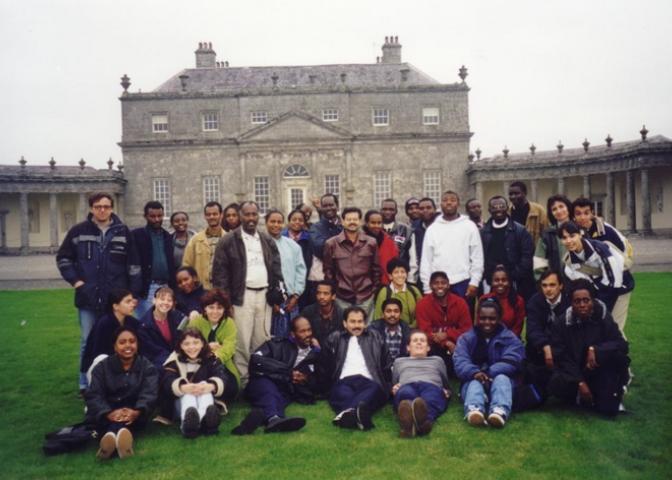 “I feel that I am an Ambassador for Ireland” says Dr. Zubair Kabir “and this connection goes so much further than just my experience as a student in Dublin”. Speaking from his office in the School of Public Health in UCC, Dr. Kabir shared his experiences of being an Irish Aid Fellowship awardee.

It is a testament to the high standard set by Fellowship awardees that the Course Director for the Masters in Public Health (MPH) in UCC, which currently has two Irish Aid fellows from Uganda and Zimbabwe on the programme, is a former Irish Aid fellowship awardee himself. Dr. Kabir was working in community medicine in India when he applied for the Irish Aid Fellowship Training Programme (FTP) and he was awarded the opportunity to study on the MSc in Community Health in TCD. “I saw the ad in a government newsletter but never thought I would be successful. I left India for the first time when I travelled to Ireland in 1999 to study and the first thing that struck me was the cold! The ICOS welcome orientation was held in UCD and I remember that it was an early start in the morning, it was cold and I needed so many layers of clothing!” Adjusting to life in a new country is often a challenge which all international students face, but Dr. Kabir described how the extra support provided through the Fellowship Programme, and particularly by Deirdre Murray and John O’Connell who worked in ICOS at that time, meant that he and the other Irish Aid fellows were made to feel very welcome and at home during their studies in Ireland. With much smaller numbers of students on the Fellowship Programme at that time, ICOS used to also organise cultural tours and Dr. Kabir fondly remembered the bus trip to the Japanese Gardens in Kildare.

As an MSc student in TCD, Dr. Kabir and his mentor, the late Professor John Kevany, understood the maternal and child health implications of childhood immunization in low and middle income countries, including India. Dr Kabir got his MSc thesis published in several journals, including the Bulletin of the World Health Organization for which he was invited as a Technical Advisor to WHO (Geneva) on the Measles Vaccine Steering Committee Meeting in 2004. Dr Kabir was given a rare opportunity to pursue higher studies in Epidemiology & Public Health in TCD where he continued his PhD studies, focusing on expanding the research being undertaken into the links between tobacco use and lung cancer. He worked with Professor Luke Clancy in the Tobacco Free Research Institute in Ireland, which is an independent research centre focused on the population health effects of tobacco use and public health policies around tobacco control. This research was of particular importance due to the policy implications it would go on to have in supporting the introduction in March 2004 of legislation in Ireland banning smoking in workplaces. Ireland became the first country in the world to introduce such legislation.

One of Dr. Kabir’s studies published in the European Respiratory Journal in 2009 was also instrumental in implementing banning smoking in private vehicles in Ireland, which became a law in 2016. “The skills that I developed during my studies in TCD were thanks to the opportunity provided to me by the Irish Aid Fellowship,” explained Dr. Kabir. These skills were developed even further in 2006-2008 during his PostDoc in the Harvard School of Public Health in the prestigious Harvard University in Boston, USA, with Professor Gregory Connolly and Professor Howard Koh (the former Assistant Health Secretary under the Obama Administration). Dr. Kabir would eventually return to TCD briefly in 2011 where he worked as a Senior Researcher in the Department of Pharmacology and Therapeutics before he joined the team in the UCC School of Public Health in 2012. As a Course Director and Senior Lecturer in the School of Public Health, Dr. Kabir is actively involved in contributing to national, European and international research collaborations, but reflected also on his early research - “I wrote 5 papers out of my master’s thesis in TCD and I acknowledged Irish Aid in all of them”.

To date, Dr Kabir has published more than 100 research papers, and has supervised many MPH students (mainly international students) within the School. Dr. Kabir is also a member of the UCC South-East Asia Working Group strengthening ‘internationalization’ within UCC and promoting Ireland as a place for study. Dr Kabir, as a member of this Working Group, has recently signed a Memorandum of Understanding (MoU) with two top Higher Education Institutions in India- the Tata Institute of Social Sciences (Mumbai) and Manipal University. As if to complete the circle from his own experience as an international student, he now returns regularly to India to promote education in Ireland to prospective students. Public health is one of the 10 priority areas for the work of Irish Aid and it represents an important priority also for the Fellowship Programme. There are a number of Public Health programmes on offer in Irish Higher Education Institutions under the Fellowship Programme and the MPH in UCC includes specific pathways for study in Health Promotion and Health Protection. Study in these areas is crucial for international efforts towards achieving the Sustainable Development Goals (SDGs) which were agreed in 2015, facilitated by Ireland and Kenya in the UN in New York. SDG 3 specifically aims to “ensure healthy lives and promote well-being for all at all ages,” but health is also closely linked to the achievement of many other SDGs related to poverty, hunger, inequality and economic growth.

Dr Kabir is the only collaborator from Ireland to contribute to the Global Burden of Disease (GBD) Study published in the Lancet recently across 195 nations which are crucial for informing national public health policy-making. The work of Dr. Kabir and all Fellowship awardees who study in the field of Public Health is contributing to these efforts both locally and globally.

Dr. Kabir was interviewed in person in Cork in November 2017.