Vandi works at the Minstry of Justice in Sierra Leone. He received a fellowship award in 2017-18 to study on the LLM in International Criminal Law at NUI Galway. 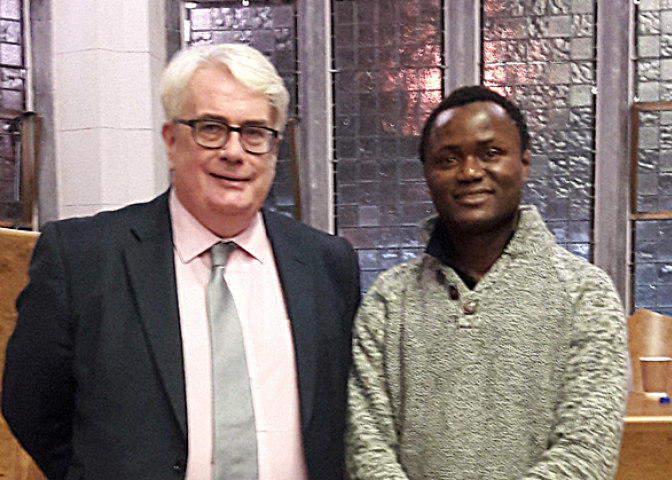 I am really enjoying the dynamic intellectual environment at NUI Galway and my interactions with colleagues and tutors, as well as all that Galway city has to offer in arts and music have been wonderful.

Prior to coming to NUI Galway under the Irish Aid Fellowship programme, I worked as a State Counsel in the Office of the Attorney-General and Minister of Justice in Sierra Leone, attached to the Prosecution’s Division in Freetown. My work included, among other things, prosecuting criminal cases for, and on behalf of, the State, giving legal advice on issues referred to our office from government ministries, departments and agencies, and case and enquiry files from the Sierra Leone Police. I was also the Attorney-General’s representative on the Trafficking in Persons Committee and the Management Board of the Transnational Organised Crime Unit, and one of his representatives on the Constitutional Review Committee.

My interest in studying on the LLM in International Criminal Law at NUI Galway was greatly influenced by my experience as a Trial Monitor with the Sierra Leone Court Monitoring Programme at the UN-backed Special Court for Sierra Leone, which held accountable those guilty of crimes against humanity and other serious violations of international humanitarian law.

In addition, Sierra Leone is in the process of domesticating the Rome Statute, which will give national courts the jurisdiction to adjudicate cases involving international crimes, such as genocide and war crimes. Therefore, the criminal justice system will need highly trained personnel with the requisite competence to be up to the task. This LLM at NUI Galway will provide me with the much-needed knowledge and skills to contribute to this system.

I have already learned so much and have had valuable experiences in Galway. Complex legal concepts are explained clearly by experts in the field, and students are encouraged to explore ideas and share experiences in a stimulating environment. The weekly lunchtime seminars at the Irish Centre for Human Rights, in which practitioners from different backgrounds have spoken on a variety of contemporary topics, have helped me to broaden my perspectives on global issues.

Before coming to Ireland, I was wondering what life was going to be like away from home for such a long time but, while I was homesick for the first couple of weeks, I must admit that I have settled down much faster than I had expected, due in large part to the Irish people who are always ready to stop, listen and help. I am really enjoying the dynamic intellectual environment at NUI Galway and my interactions with colleagues and tutors, as well as all that Galway city has to offer in arts and music have been wonderful. However, I still miss the tropical climate back home and playing soccer  at the weekends, although I have signed up to join the men’s soccer team at NUI Galway.

When I return home next year with a postgraduate degree, I expect to be promoted and given more responsibilities. I hope to be more involved in assisting with policy directives, as well as supervising, training and mentoring other colleagues. In addition, I expect that the skills and knowledge acquired from my course will be used to support ongoing reforms in the criminal justice system. The new insights on global issues I have gained will make a difference to my work on national issues.

In the future, I look forward to the domestication of the Rome Statute so that Sierra Leone’s national courts can have competence to try international crimes. Through this, the country will demonstrate its commitment to international treaties it ratifies, and its pursuit of judicial accountability. In addition, Sierra Leone will be acclaimed internationally for not providing safe haven for criminals.

Personally, I hope to continue my career in the field of criminal justice. I hope to gradually rise through the ranks and to one day become the principal legal advisor to the Government of Sierra Leone. My thanks to Irish Aid for being part of my story.

Vandi was interviewed in December 2017